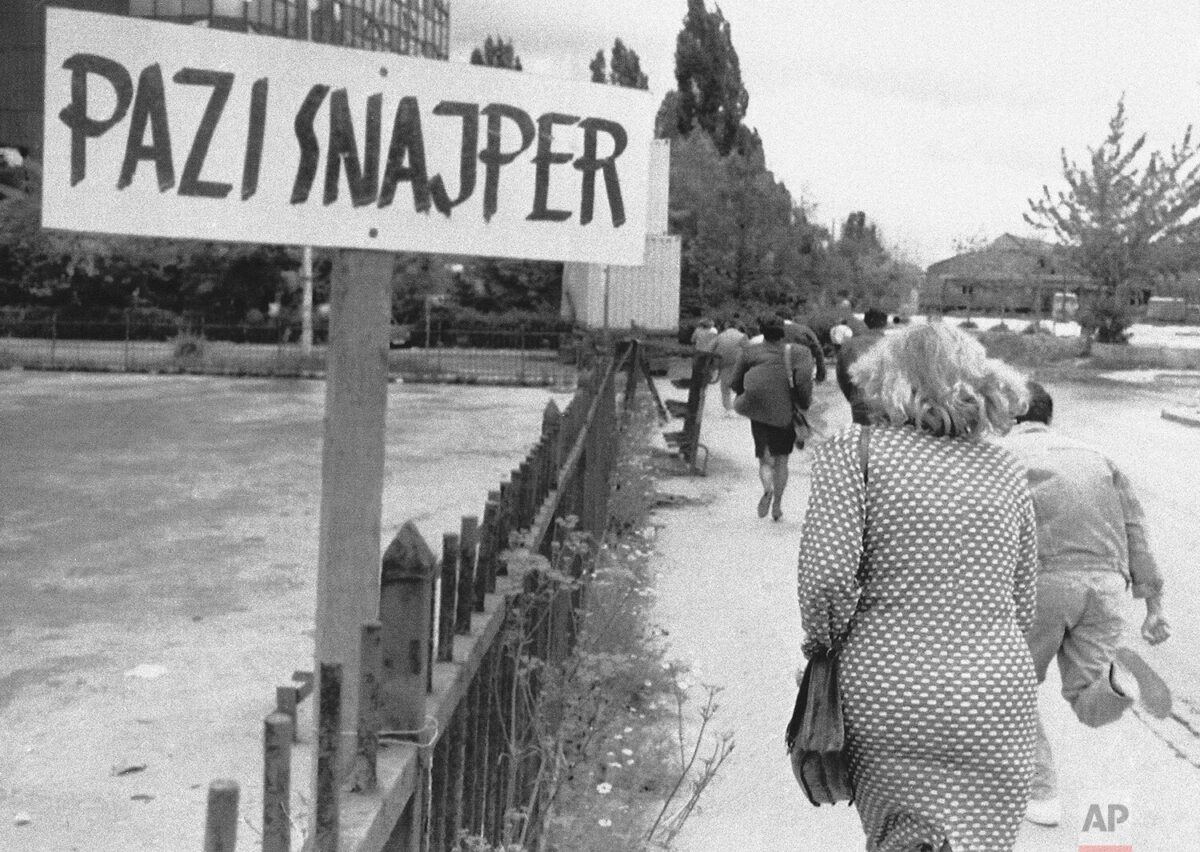 SARAJEVO, March 10 – It was only a matter of time until the sniper got somebody.

It was perfect shooting weather today. No clouds, fog or falling snow to obscure a sniper’s view. Just blue skies and bright sunshine. It’s the kind of promising weather that makes people want to stroll outside, but in Sarajevo it’s best to resist that temptation.

Near the Holiday Inn, there’s often lots of sniper fire. A wide boulevard runs in front of the hotel and a denuded park behind it. There’s no cover from gunfire.

You can’t see the snipers, but you can hear their bullets and see the damage. There’s a sniper who shoots along the west side of the hotel with an anti-aircraft gun. Sometimes he hits an adjacent building, and you can see the plaster falling from the bullet’s impact. Some of the bullets are explosive-tipped, and you can see bursts of sparks when they strike.

It’s a big gun and relatively inaccurate, so the sniper scares more people than he kills. On an average day, he shoots 50 bullets the size of small carrots.

There’s another sniper, or perhaps a few of them, with high-powered rifles who fire from the east side of the hotel, right into the park. The park used to have trees, which obscured the snipers’ view, but those were cut down long ago for firewood.

From a hotel window, you can look down at the park and see people jog across it in zig-zags or sprint at full speed.

At any time of the day, there are old people moving as quickly as they can, slowed by age and perhaps a pail of water in one hand. There are mothers running while dragging their short-legged children. There are also some defiant souls walking at a normal pace, too tired of being scared to give a damn any longer.

The sound is so sharp that you think the sniper is firing from the window next to yours. You flinch even though you are out of his line of fire. He’s actually 200 yards away or more. But for a sniper, that’s close range.

A few minutes past 4, one of his bullets knifed through the air. Crack. Whistle. Echo. Then, there was a scream, one that was so terrifying that it brought a reporter to the window.

About 100 yards away, a man was stumbling alongside the park in a disjointed gait, emitting a high-pitched scream. He looked young and he shouted, “Help me! Help me!” He was probably hit in the chest — his legs were still working and he most likely would have been unable to run had it been a head shot.

His scream went up and down in intensity, like a siren running out of power. It was a scream you would expect to hear in a mental hospital, a mad howl of a person pushed over the edge. It came from the lungs, from the heart, from the mind. There’s a moment in Sarajevo that is almost too horrible to express in words, so sometimes it comes out in a howl that cries, “My God, I’ve been shot. I’m dying.”

He tried to reach a building across from the Holiday Inn, out of the sniper’s view. He stumbled for about 50 yards, slowing down with each step, and fell about 15 yards away from a protective wall. He was alone, on his knees. The scream turned to moans.

It was like that for about a minute. Then, a man in his twenties dashed into the exposed area from a nearby building, crouched next to the sniper victim and tried to help him to safety. The victim got up from his knees, but after a faltering step, he collapsed onto the ground.

Several other men ran into the open, picked up the sniper victim and carried him into a passageway under the building. “Auto! Auto!” one of them shouted. People in Sarajevo know what that means — somebody has been shot and must be driven immediately to the hospital.

A white car appeared, screeched into the passageway and, a minute later, screeched back out again, heading toward the State Hospital, which fortunately is less than a half-mile from the Holiday Inn. The sniper victim had the luck to be shot near a hospital.

After somebody has been shot, the area usually remains deserted for a while. It turns quiet — no people, no cars, not even any birds. It is almost peaceful. Until, as often happens, an unsuspecting person blunders along.

About 40 minutes later, two girls who obviously did not know what had happened started walking through the park. A sniper shot whizzed past them. They dove to the ground. They were in no man’s land.

For a heart-stopping minute or two, they crawled along the ground, faces in the mud, like soldiers, and tried to get to safety. A couple of men who were in the secure shadow of the Holiday Inn shouted directions. Stay low. Crawl.

The girls were lucky. After crawling through the mud, they scrambled to their feet and darted through the final stretch, heading in different directions, zig-zagging like angry fireflies. Their scarves floated in the wind behind them.

After they disappeared, it turned peaceful once more. Darkness soon fell. For the sniper, it had been a busy day.