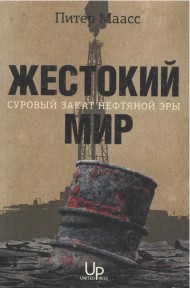 Don’t worry, my website hasn’t been hacked. The headline for this post is the Russian title of Crude World. The Russian roughly translates as “Cruel World: The Severe Decline of the Oil Era,” which is a bit different from the original wording in English. If you’d like to purchase a copy, it’s published by United Press and goes for 396 rubles; click here for the link.