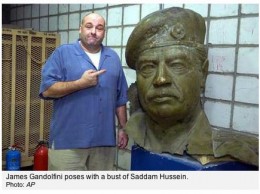 If you have an unlimited appetite for information, photos and trivia about the toppled statues of Saddam Hussein, there’s a website and book just for you — Toppled by Florian Gottke. My favorite photo in the book shows James Gandolfini, who during a visit to U.S. troops stood next to a toppled head of Saddam Hussein (not the head from Firdos Square, though).