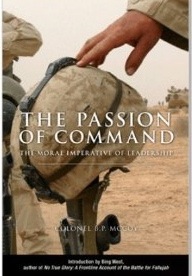 Col. Bryan McCoy, who commanded the battalion that toppled the statue of Saddam Hussein in Baghdad, has written a fine book about military leadership. It’s called Passion of Command: The Moral Imperative of Leadership, and it has a lot of admirers in the military community.