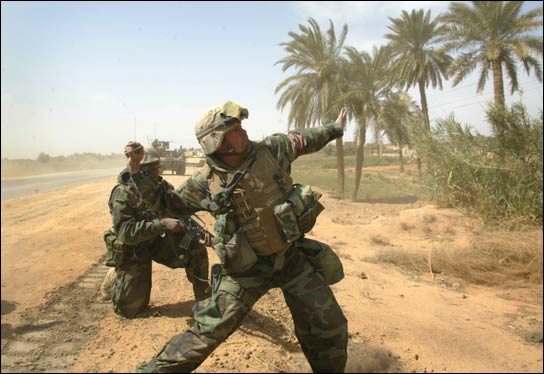 McCoy, who has written a monograph on military leadership, “The Passion of Command,” understood the importance of the media. That was one reason he had agreed to let me and ten other unilateral journalists follow his battalion, which already had four embedded journalists. The reporters worked for, among others, the Times, Time, Newsweek, the Associated Press, and several photography agencies. McCoy occasionally joined us for coffee in the morning, giving us brie?ngs about the battles along the way to Baghdad, and he made it clear to his men that we were to be welcomed. When he threw a grenade at an Iraqi position one day, a photographer was at his side, and the photograph was widely disseminated.

The photo was taken by Robert Nickelsberg of Time.