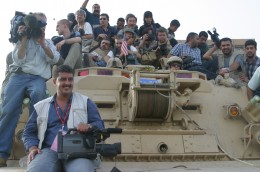 The hundreds of journalists at Firdos Square were rarely shown on TV or in photos; their influence on the toppling was obscured. But a Marine who was at Firdos shared with me a series of photos that show the journalist-saturated scene around the statue. The first two photos in the set show the cameramen and photographers atop the M88 that took down the statue.

The third photo shows them at the base of the statue, waiting for it to come down. The final photos show the mixture of photographers and Iraqis in the melee around the fallen head of Saddam. All photos by Bryan Mangan. Click here for the photo set.