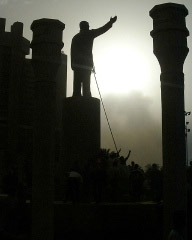 Read all about it, sadly, in today’s Washington Post. “‘We’ve been given a job that we haven’t prepared for, we haven’t trained for, that we weren’t ready for,’ said a senior civil affairs officer in central Iraq. ‘For a lot of the stuff we’re doing, we’re making it up as we go along.'” Or read about it from the perspective of a former ambassador who was sent to Baghdad to help the reconstruction effort. Timothy Carney writes: “I just finished eight hot, dusty weeks there trying to get the Ministry of Industry and Minerals running again. I offer these vignettes to show how flawed policy and incompetent administration have marred the follow-up to the brilliant military campaign to destroy Saddam Hussein’s regime.” And there’s more in the latest column by Thomas Friedman, who writes, “A successful U.S. rebuilding of Iraq is the key to America’s standing in the world right now. But Mssrs. Bush and Rumsfeld seem to be treating it like some lab test in which they can see how much nation-building they can buy with as little investment as possible. As one Marine officer said to me: There is something to be said for doing war on the cheap, but if you want to do war on the cheap, ‘pick a country that doesn’t matter.'”