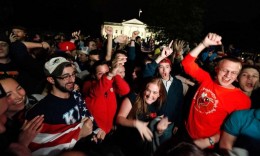 Earlier this year I wrote a lengthy story for The New Yorker about the toppling of the statue of Saddam Hussein in Baghdad in 2003; the story was, among other things, a study of how the media tends to substitute a photogenic minority for a less-photogenic multitude, even if the minority does not represent the multitude. I’ve just written a short online-only piece for The New Yorker about the same topic, focusing this time on the celebrations in America over the killing of Osama bin Laden. The raucous and photogenic gatherings of college students were not, I argue, representative of a more-sober reaction among the majority of Americans, yet they dominated coverage of the country’s reaction. The visuals were fantastic; the journalism, less so.