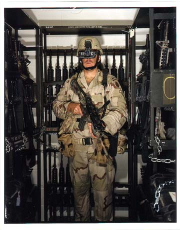 My newest story, about the Special Forces, is in today’s New York Times Magazine, and is posted here and here. This is how it begins:

Major Christopher Miller lay awake on a cot in a filthy room, no larger than a prison cell and cluttered with weapons and ammunition. He couldn’t sleep. It was a cold January night at the Special Forces base in Kandahar, and Miller was on the verge of commanding an assault against six Qaeda fighters barricaded inside a nearby Afghan hospital. So many things could go wrong, Miller realized, and it could be disastrous if any of them did. For the first time in his life, Miller would be engaging in C.Q.B. — a military abbreviation for ”close-quarters battle.” After years of training, he would finally become, as he told me recently, a ”manager of violence.” An eight-year veteran of the Special Forces, he had never killed before, had never given an order to kill, had not even seen a dead soldier. All that would change at dawn, because men would surely die in an attack he would initiate with a one-word command: execute.